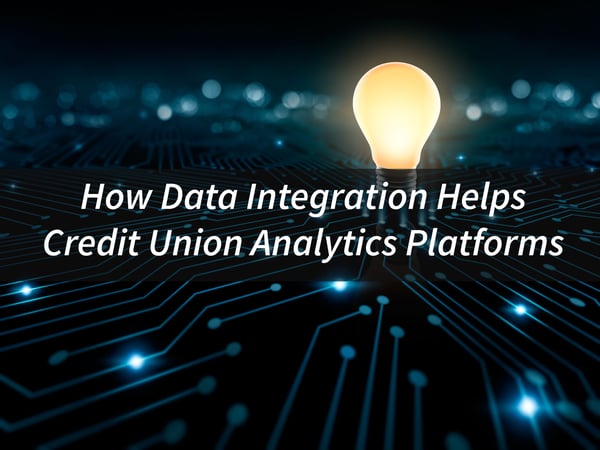 The immediate future of banking and the financial industry is in analytics. The ability to draw conclusions from massive sets of data helps financial institutions improve their advertisement targeting, their ability to underwrite loans, and a whole host of other things. One of the sticking points in the machinery is in credit unions’ ability to perform adequate data integration.

This will be a long answer, and so I’ll break it up into three parts. The first part will address the many sources of data that credit unions deal with on a daily basis. The second part will introduce the necessity of analytics platforms in finance. The third section will explain the role of credit union data integration in the grand scheme of things.

The information that credit unions produce and store comes from several different sources. In fact, most credit union data come from an average of between six and eight sources, although some may include more. All these individual streams of data can be difficult to parse on their own. It’s not surprising then that credit unions also have a hard time bringing all the sources of data together.

The reason why data integration is so important is that data is useful. Let’s use a logical syllogism as an example:

Now, I actually know several short doctors, but bear with me here. Let’s just assume that both statements above are 100% factual. These are our two data points from which we must draw our conclusion, and there is only one logical conclusion to draw from these logical propositions:

If both the first and second statement are true, then so must the third. We have successfully completed a logical syllogism to its conclusion!

Analytics platforms are light years more sophisticated than logical syllogisms. Instead of relying on two “true” prepositions, they assign weight and value to countless points of data, and then they use predictive analytics models to draw eerily-accurate conclusions from massive sets of information.

The problem with the data generated by credit unions is that it’s heavily siloed. All the data is coming from different sources, and rarely do those sources communicate well (if even in the same language). Their output comes in different forms because the output addresses different areas.

Good luck drawing a decent logical conclusion from that!

Data integration for credit unions combines the many sources of data and converts them into one easy, single point of truth.

Essentially, data integration helps credit unions collect and store their data and turn it into a usable resource.

What it all comes down to is building a better analytics platform that will allow credit unions to compete with other financial institutions.

If you’d like to learn more about what you can do with data integration, or if you’d like to see what happens when credit unions undertake collaborative analytics, follow the links below.

<< Using Big Data to Move Beyond FICO and LTV for Loan Analytics The Death of the Branch: A Lesson About Credit Union Data >>