The Failure of Nokia: A Lesson about Credit Union Data 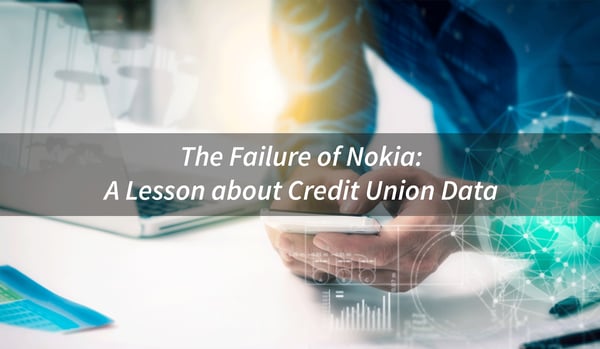 Credit unions have a great deal of data on their members - how much they earn, where they spend their money, how much their house is worth. Credit unions now have access to more data than they ever had before. But most fail to leverage that data, and this should be a big concern.

The corporate landscape is littered with companies that couldn’t see or refused to see, changes in their customers’ expectations. For example, Nokia was once the most popular mobile phone provider, dominating the market. However, the company relied on its reputation, which was stellar initially, and in its belief that it knew what the consumer wanted. The problem is that many consumers don’t know that they want something until they see it. Apple, on the other hand, introduced a phone without a keyboard in 2007, something Nokia refused to do until several years after the introduction of the iPhone.

Nokia also believed its Symbian operating system was superior, and it was until Android was introduced in 2008. By 2010, nearly all of the major phone manufacturers adopted Android, except Nokia and Apple. It was hailed as intuitive and easy-to-use, and its commonality drove a proliferation of mobile apps. But Nokia clung to its now clunky-by-comparison operating system and in 2014, sold its mobile phone business to Microsoft.

Credit unions are in jeopardy of not seeing the change in consumer expectations. There’s a saying credited to IBM’s Bridget van Kralingen, “the last best experience that anyone has anywhere, becomes the minimum expectation for the experience they want everywhere.” Rocket Mortgage, for example, may not always have the lowest loan rates, but its obsession with providing an excellent start-to-finish online experience is the main reason why it has surpassed Wells Fargo as the leading direct-to-consumer mortgage lender. How can credit unions provide that level of member experience? Through data analytics. By knowing your members and meeting them where they hang out.

In the past, credit union success was closely tied to the number of branches it had open. More branches led to more members, larger volumes of deposits and loans, and greater success for the credit union. All of this success was measured by credit union size rather than credit union data. Today, instead of coming into branches to deposit checks, members are now using remote deposit capture to take pictures of checks and make deposits instantaneously. Also, instead of visiting a loan officer at a branch, members are now filling out loan applications online. With this declining emphasis on the physical branch, how can credit unions continue to attract and retain members and improve their business? Credit unions should be making Amazon-like product recommendations (imagine seeing something like “members who have auto loans like yours also looked at our credit card”). Your members are already getting recommendations from creditcard.com and other sites. So, this kind of engagement is crucial.

What Amazon understood at its inception is that there is value in transaction data. They quickly realized that the data each customer generates is where the real value lies. Every time a customer clicks on a page; stays on a page for any period of time; purchases a product; revisits a product and so on, Amazon learns more about the individual, and can treat him/her uniquely based on these interactions.

Credit unions should follow this example. Any data gathered on member preferences and interactions can be used to personalize each member’s experience. Fortunately for credit unions, member data is in abundance. Credit unions may have some of the richest data and certainly, know more about many of their members than Amazon knows about its customers. You have an excellent opportunity to take advantage of this data to better serve your member base and attract new members. Data analytics must be a top strategic priority now, starting with putting the proper data infrastructure in place that will support complete data integration of all your report sources and the necessary tools to create actionable insights from the data. Contact us and let us partner on your data journey.

<< Are Credit Unions Missing Out On a Growth Opportunity? Three Factors for Success with Credit Union Data Analytics >>